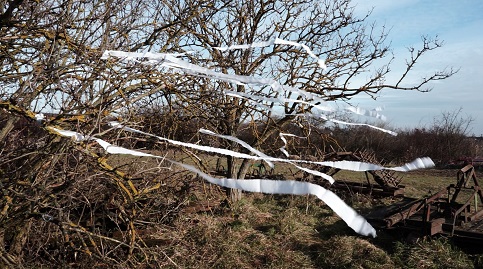 What if the alphabet was invented by the trees? What if the alphabet was invented by the trees? In her project The Elder Poem Elisabeth von Samsonow explores and stages convergencies  between art and ecology, namely poetry and botanical systems. Starting from the Old Irish Alphabet of Trees Beth-Luis-Nion as explored by Robert von Ranke-Graves in his voluminous book ”The White Goddess“ Samsonow maps the Land of the Goddesses, which she co-founded with agroup of artists and supporters (among them the Grazer Kunstverein) in 2020 in Lower Austria.This land is a highly diverse territory with wine, wood, field and bushland. Using a system of association between letter, tree, place, quality, historical and mythical narratives (which is also the case in the Alphabet of Trees), von Samsonow reads the landscape of this biodiverse habitat, and in doing so creates a journey into the core of imagination, a poem written by the land itself.

Von Samsonow‘s project aims at giving space to gestures of attention and mutual recognition,expanding the zone of transhuman communication. The project seeks to offer new dimensions to ”thinking Gaias“ or ”reading Gaia“, the autopoetic planetary force, and to support the creation of ”trigger points“ which serve as nodes for building a complex architecture of coexistence.

The Elder, giving name to the project, is a bush or tree that features frequently in fairy tales, folkmedicine and mythology, as a healing plant offering flower, berry and bark for therapeutical use. Technically it is a pioneering plant able to grow even under difficult conditions. The Goddesses‘Land is located in the region of Hollabrunn referring to the connection between the Elder and the ”fountain of Holla“ which is the Goddess, more precisely: the White Goddess or her Winter aspect.The project engages with local village residents, hunters and farmers in order to retrace the manifold imaginaire of Elder in the region.