Sex coincides with our being. The sex act is regarded as intimate, but causes the public sphere to culminate in personal space at the same time – as a singular expression and actualization of politics, as communication, as an arena of pleasure and fantasy, reproduction and violence. Just like sex, art is also paradoxical; both act within contradictions, in in-between-zones and opposites. They are accomplices of knowledge and at once producers of a sensual surplus that is resistant to the categories of knowledge.
Does the alliance of art and sex allow us to re-weave the customary infrastructures of excitement, withdrawal, pleasure and its discharge? Can we fantasize a grammar of future sex in which the aggression of pleasure does not serve to consolidate power relationships?
The works by Sarah Decristoforo, Fabiana Faleiros, Alex Martinis Roe, Elisabeth von Samsonow and Ashley Hans Scheirl, most of which were realized specifically for this exhibition, generate non-normative experiments of sex in drawing, sculpture, video, sound and installation. What kind of visualizations, embodiments, apparatuses, settings, texts and tutorials permit us to anticipate a sexual economy that is based on excessive exchange and radical solidarity? How could we effectively edit the scripts of our sexual identities? What roles are played by prosthetic devices and hormones, citations and yoga, over-expenditure and waste, the clitoris and digital interfaces in this process? 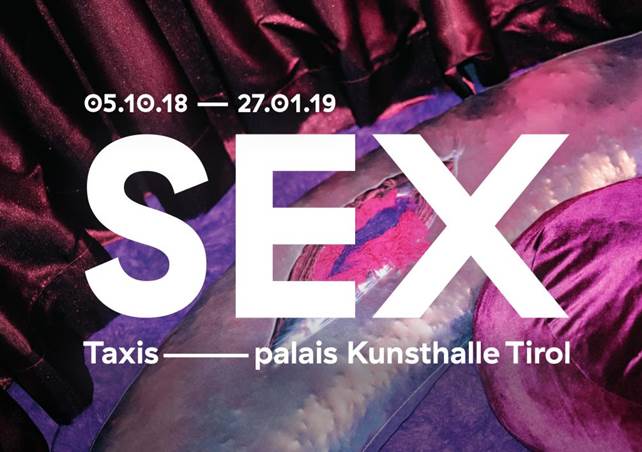 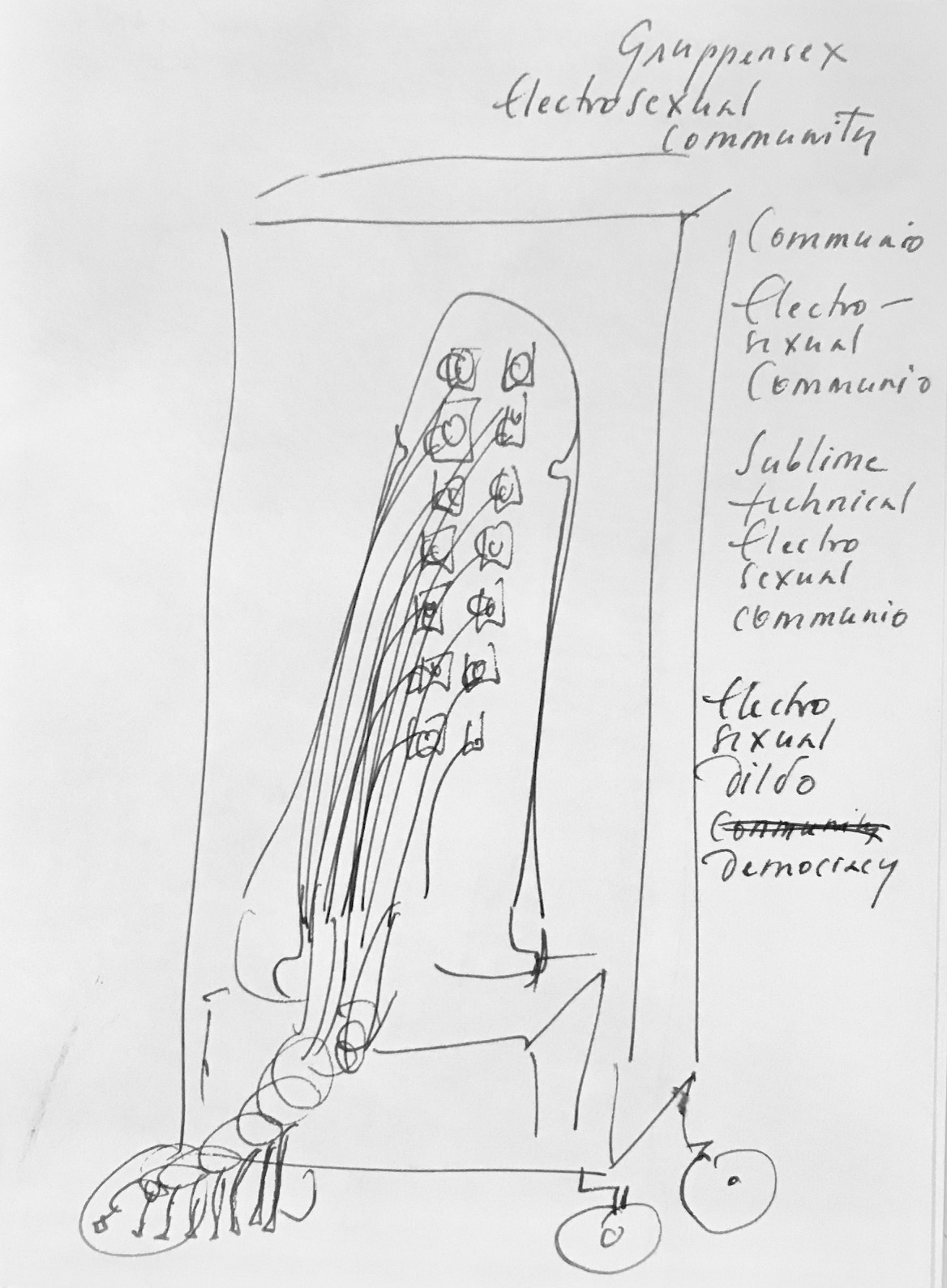 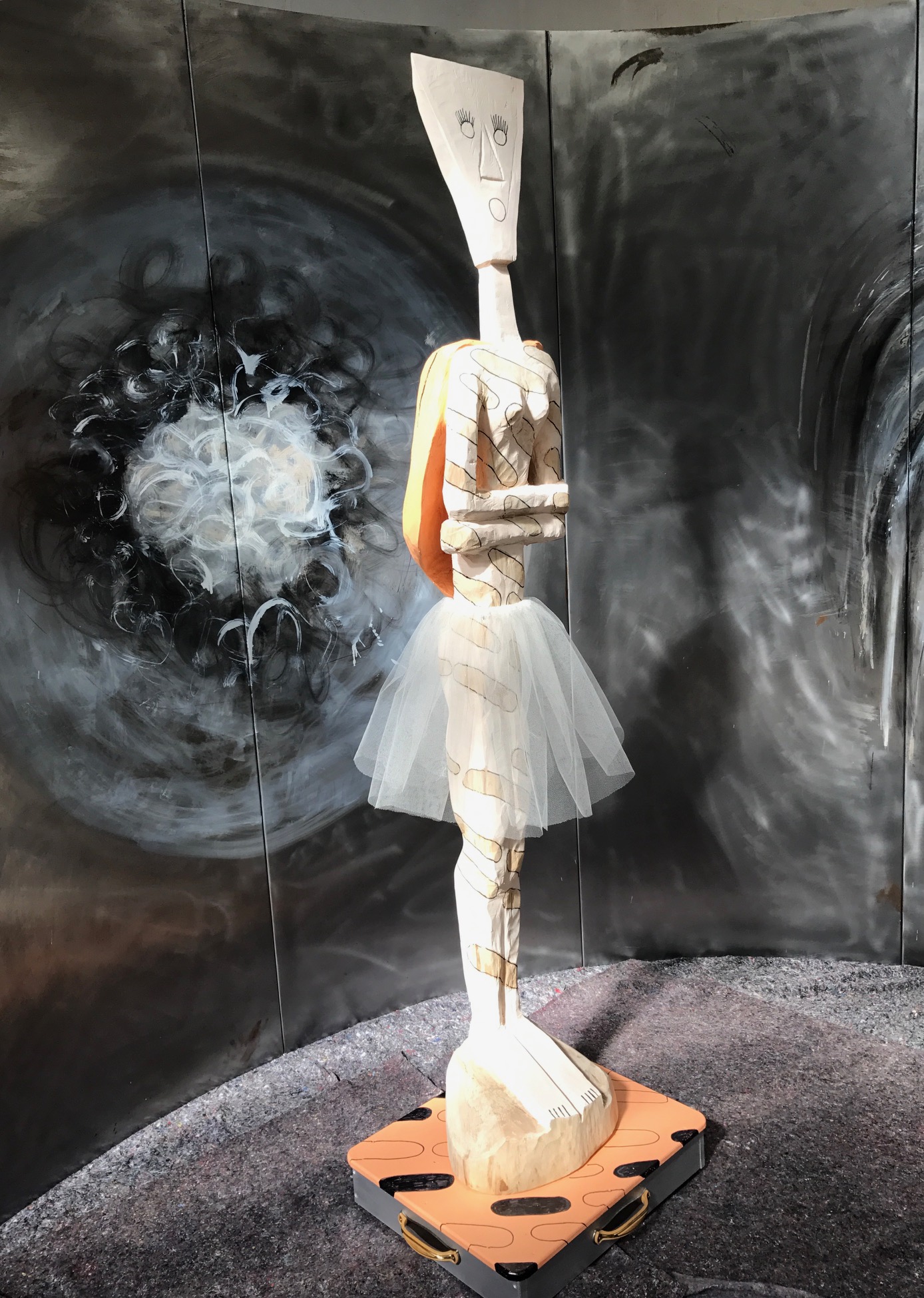 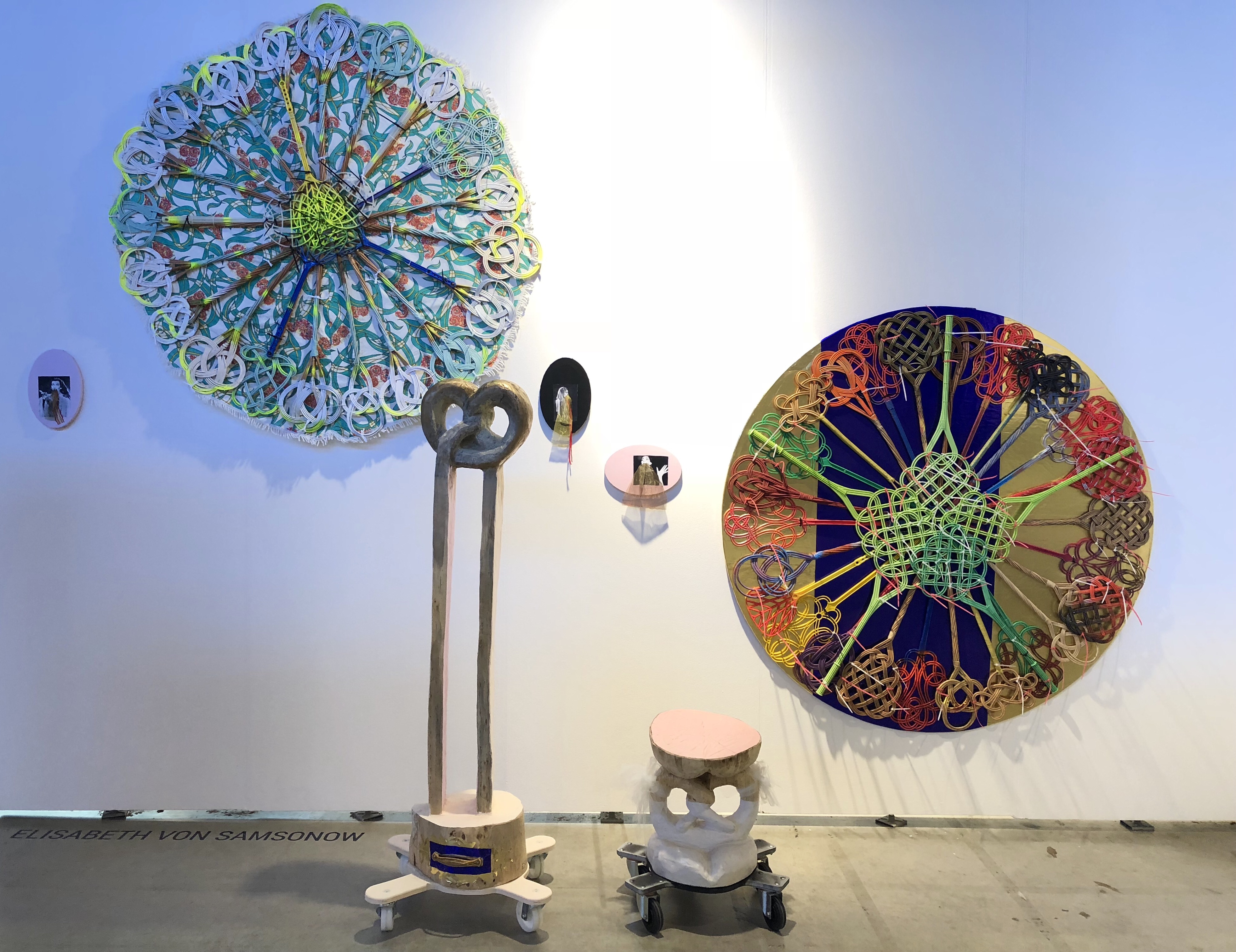 Elisabeth von Samsonow shows a picture from her Performance, THE PARENTS BEDROOM SHOW by Juergen Teller, 2018 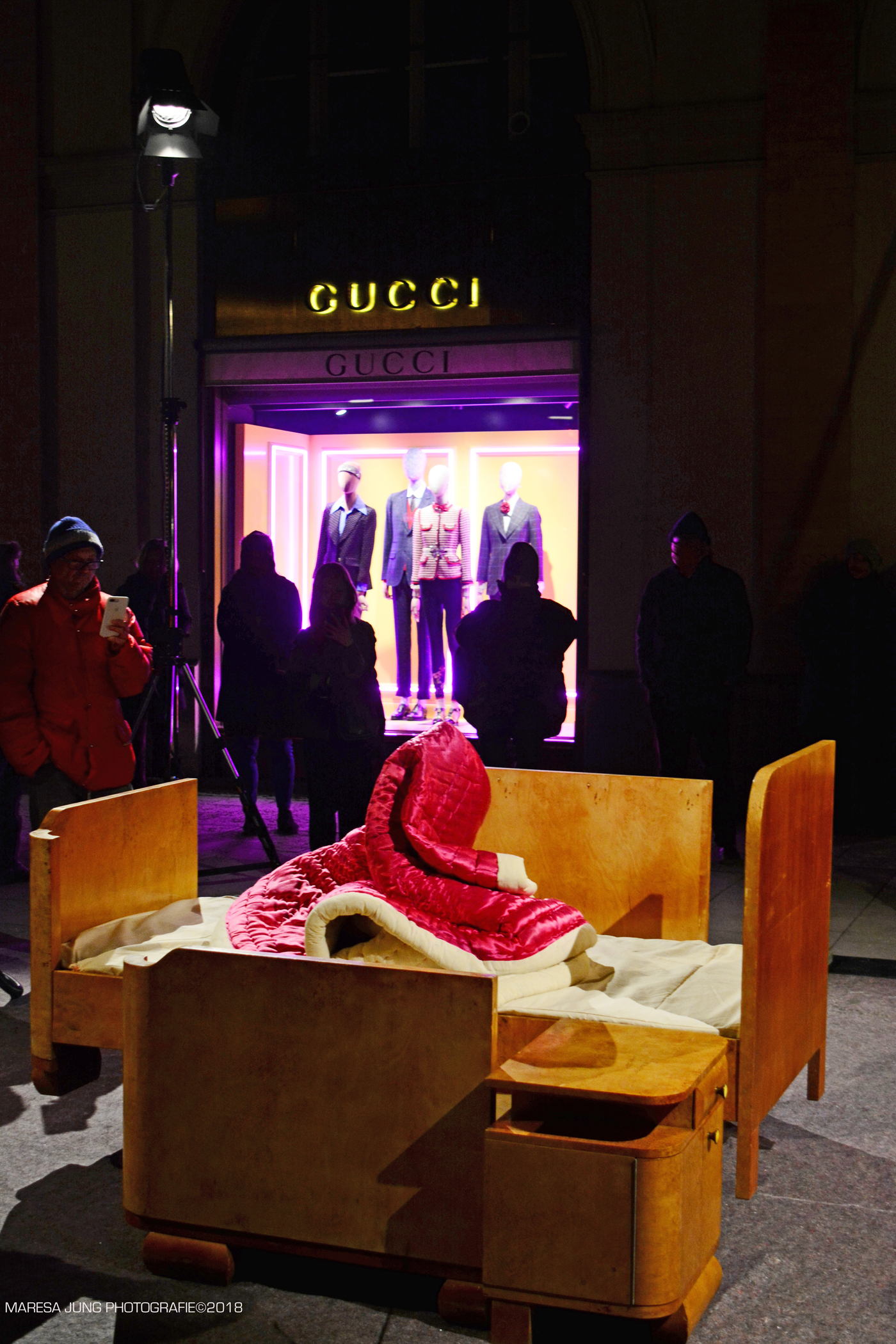 The exhibition at Galerie Lisi Hämmerle (opening on Saturday, 14 July 2018) presents sculptures, paintings, drawings, and photographs. Connecting these works is the theme of the "everyday marvels"—those things that have grown inconspicuous through (practical) use, though they contain plenty that is incendiary. Take the pretzel, for example. Artfully looped, it is not only a welcome snack, it also represents a mathematically highly sophisticated topos that could well serve as a model world. The same applies to braids. Or to wood, which is the real everyday mystery, at least for the sculptor, who prefers to work in basswood. This exhibition is guided by the hypothesis that the household is the camouflage archive of  metaphysical objects that discretely inspire speculation about the world (such as clotheslines, clothespins, washcloths, bread in the form of rolls or pretzels or loaves, sausages, electric mixers and kettles, knives, forks, tongs and scissors, brooms, sweepers and vacuum cleaners, linens and other cloths, carpet beaters and plates, etc.). It may be suggested that the (female) knowledge achieved by being exiled to the household—going against the grain— represents intimacy with the basic elements of the world, since the household  manifests cosmology and solid state physics (disguised in banal functions, which applies above all to the furniture) at every turn. Meaning emerges from bodies like sound, light, voice. 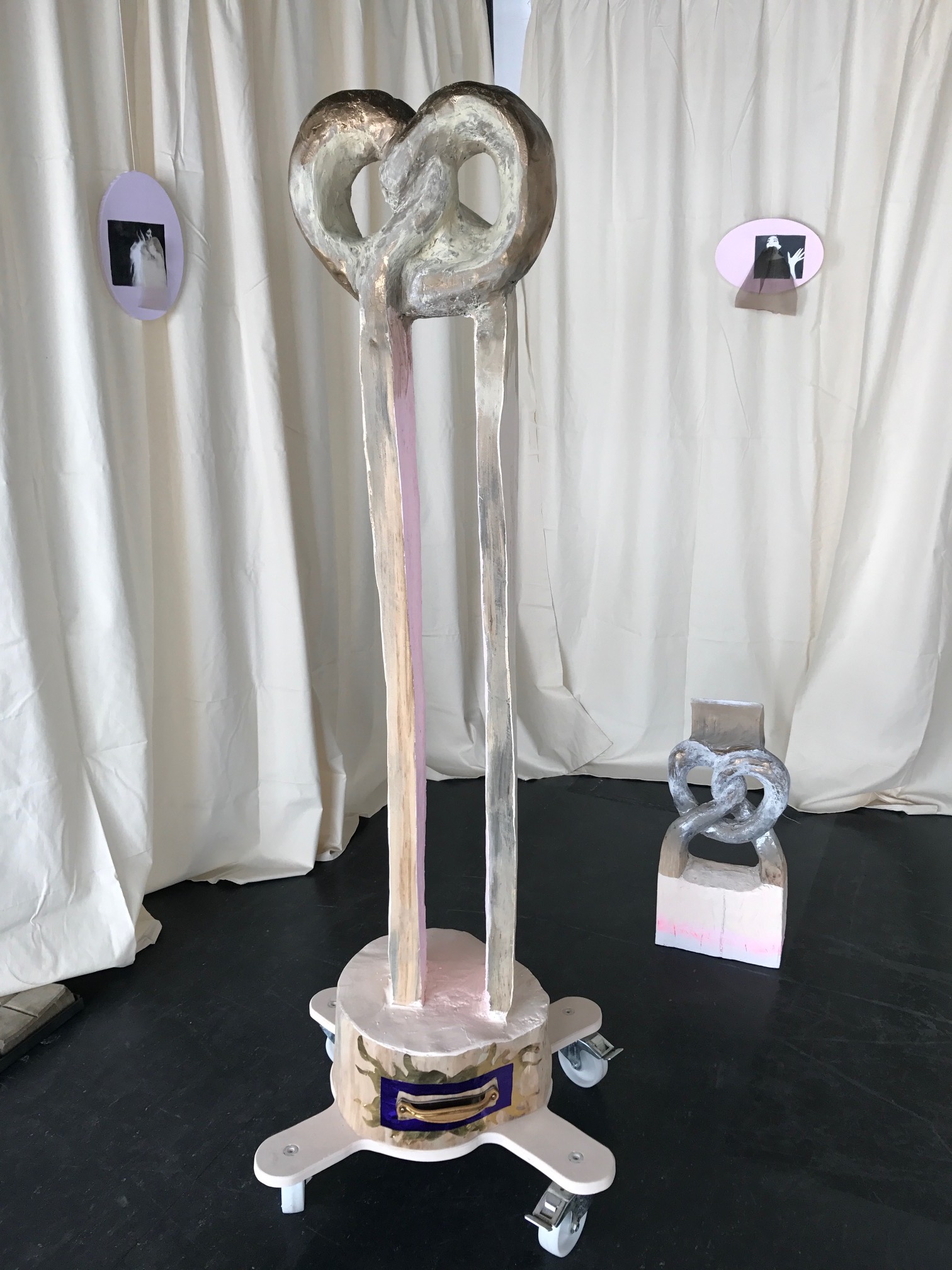 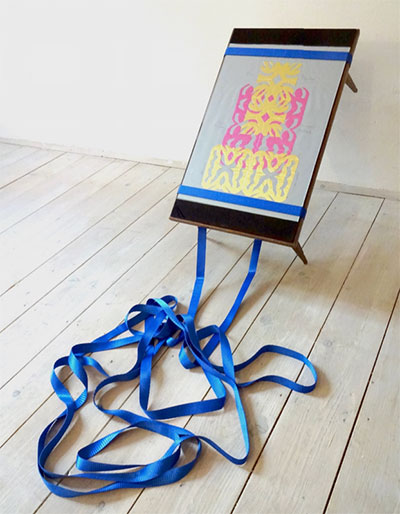 The History of Psyche

Anti-aging is heard more often in our society than the wisdom of age, it would seem. Bowing to the cult of youth, images of age are often dictated by the cosmetics industry. Countering this are the many historical and contemporary works by artists pursuing a completely different idea of age. For the first time these are being showcased in a comprehensive exhibition at the Belvedere.

Elisabeth von Samsonow's film LABORATORY OF THE EXO/ ENDO CORPUS (12'40, A 2017) is screened in the framework of the VIENNALE 2017 on the 23rd of October at 8.30 pm in the Stadtkino/ Künstlerhaus (Karlsplatz 5 in Vienna) and on the 30th of October 2017 in the Metro Kino/ Historical Hall. 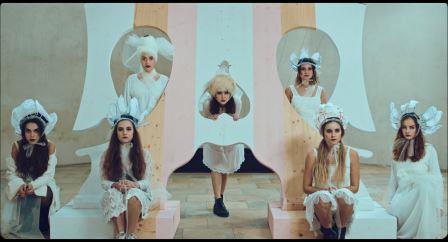 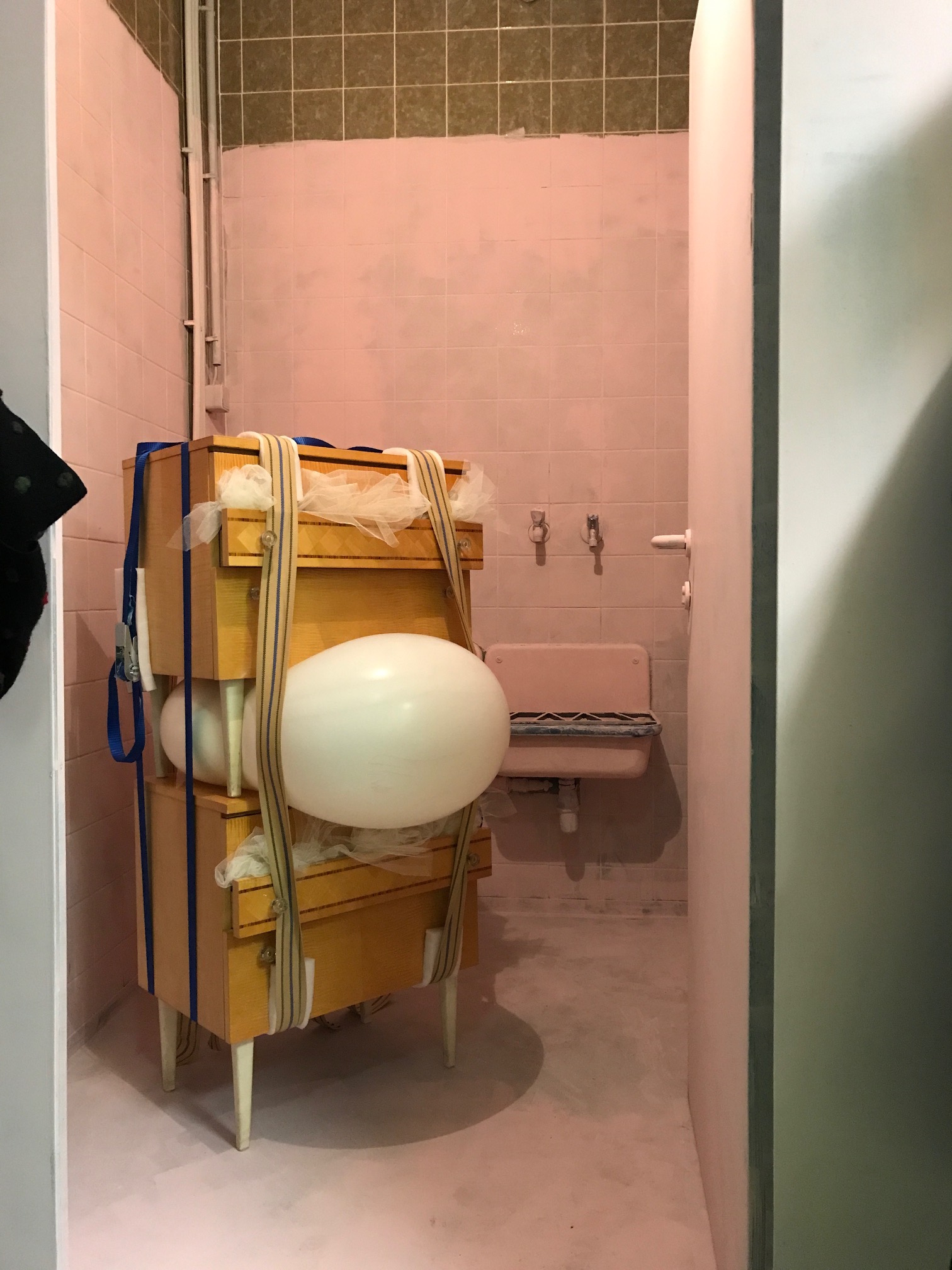 (performance days: 28.-30th of June)
Elisabeth von Samsonow’s piece is a threefold performative work on the subject of Electra, a character that has played a key role in Vienna at the turn of the century. The figure was engaged in order to unfold feminine psychic structures not only by Sigmund Freud, but was also staged in the play by Hugo von Hofmannsthal (1903) and in Richard Strauss‘ Opera orchestrating Hofmannsthal’s Libretto (1909). I relate the „hysterical“ figure of Electra to the girl character of Strawinksy’s ballet für Les Ballets Russes Le sacre du printemps which was first staged at nearly the same time, 1913 in Paris. Both plays, Electra and Le sacre du printemps show the girl in a key role as „victim“ – in the case of Hofmannsthal/Strauss as the victim of a family tragedy, in the play by Les Ballets Russes as a victim of spring, meaning that she is elected to die in a tribal rite for the revival oft he season.
Elisabeth von Samsonow’s work analyzes, comments, re-enacts and remembers the features oft he character of the girl in ordert o ward it off its negative position as a „victim“. 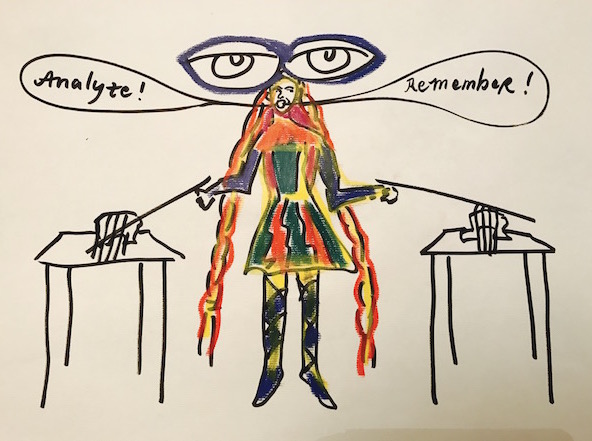 Having explored Photosynthesis the artist focuses on growth, after phyto-metamorphosis (becoming plant) comes geo-anatomy. The result: the earth is an ectstatic being. 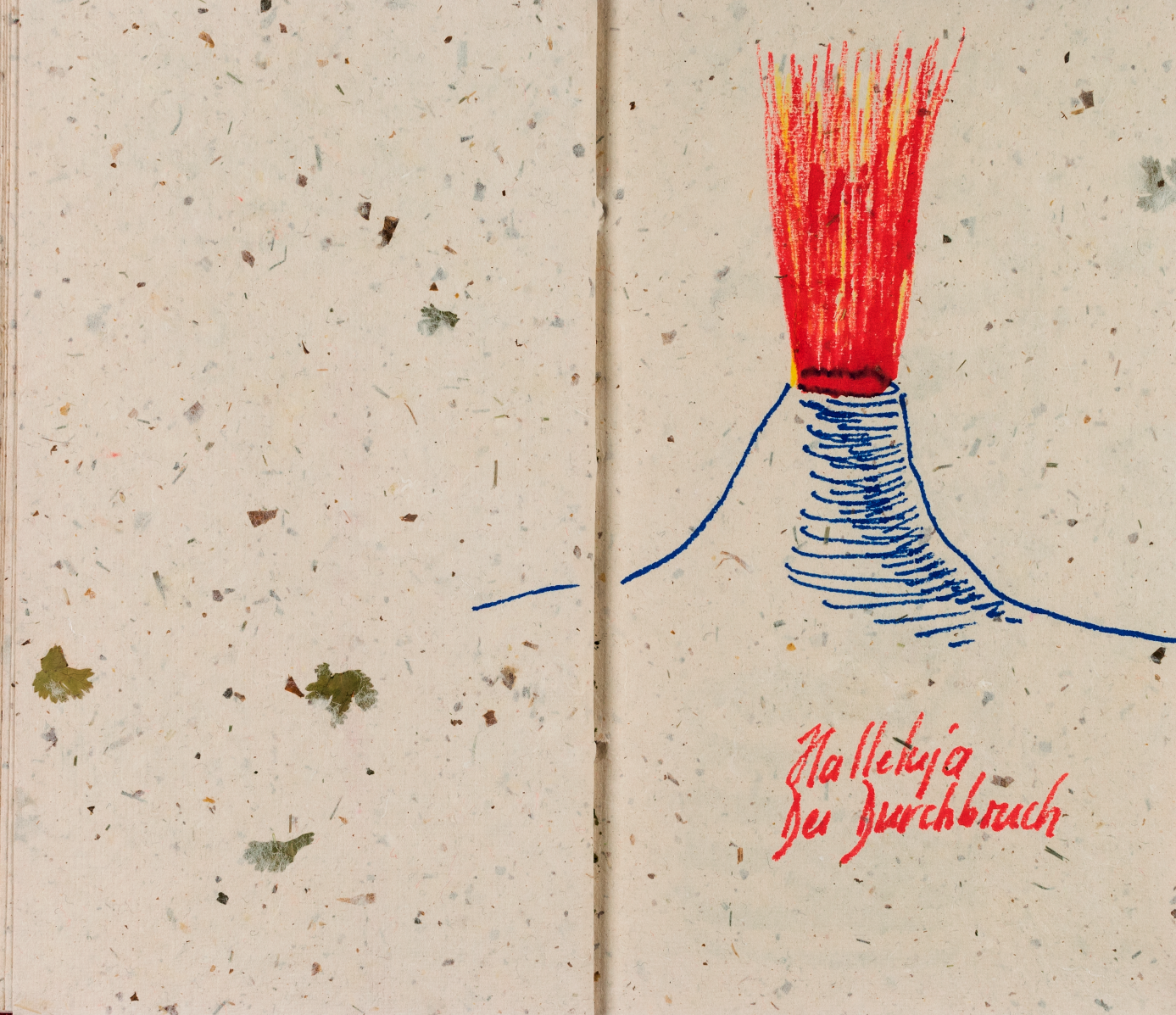 Elisabeth von Samsonow is invited to take part in the „Lake Blue Heaven Qingdao International Spring Art Salon“ in China, curated by Shan Hong, exhibition runs from 19th of May until 9th of June 2017 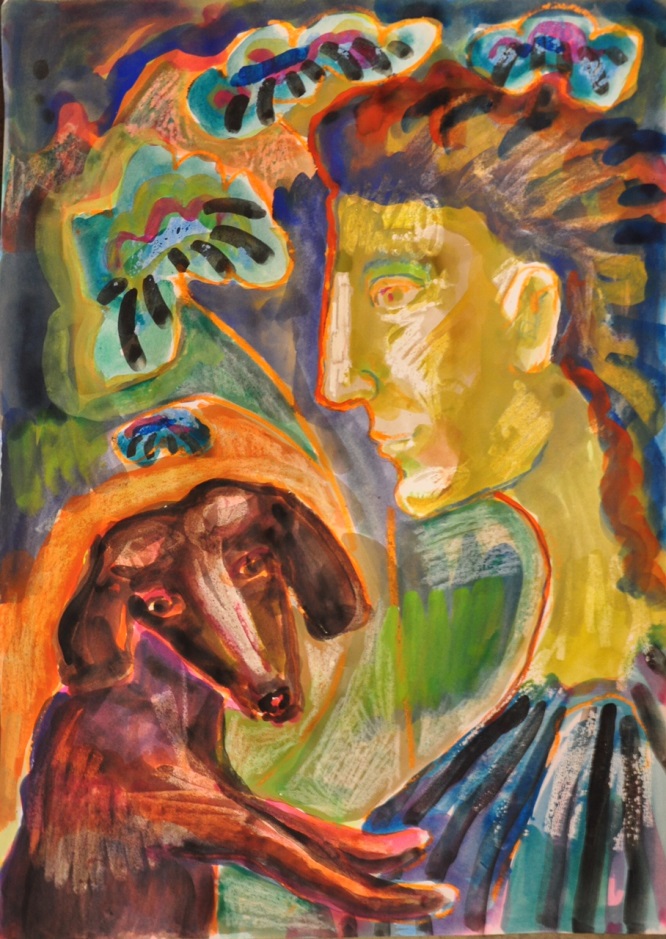 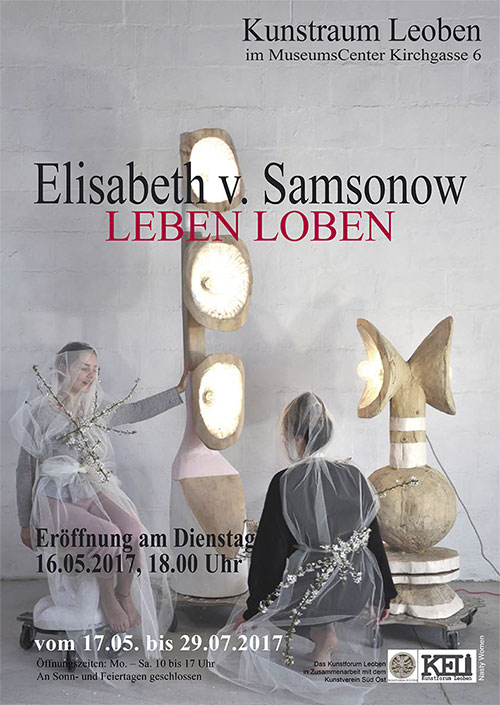 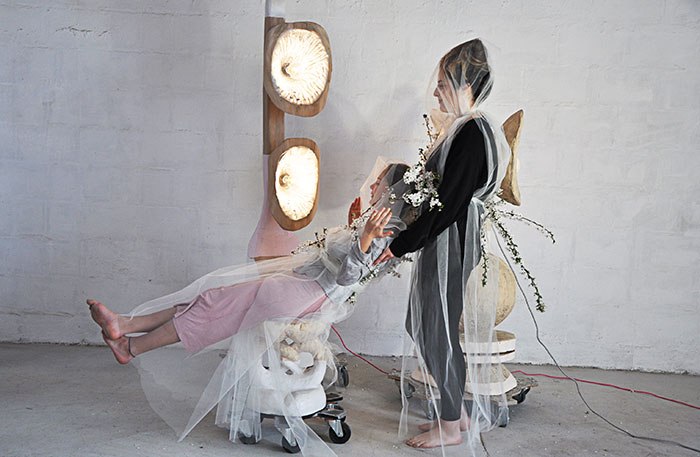 I do not like this part / I am going to cut this off/ Let me change this a little bit/ Ah, here something has to be done/ This line is not yet this/ This shape is somehow, hm/ There is not enough tension in that line/ Ha this one I am going to take off totally/ No, that is not good yet/ This has to be refined/ This form is not interesting/ In a way, this looks not really appealing/ I am going to sand this/ Here it needs some paint/ The way this….. 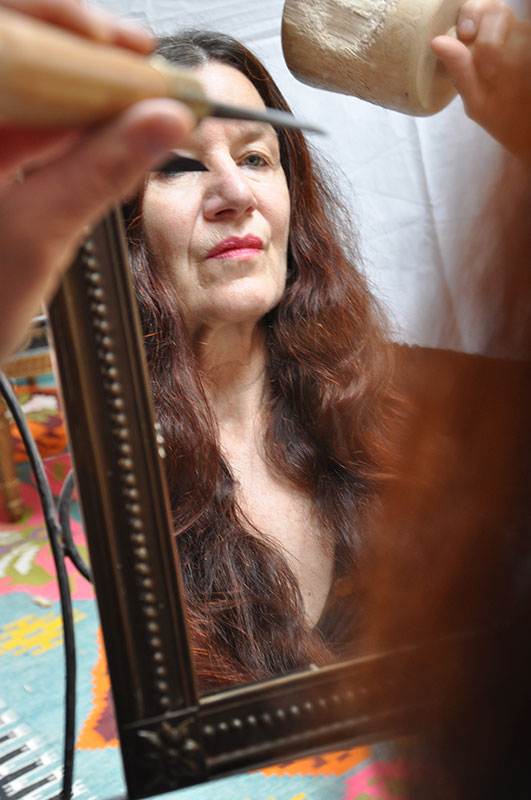 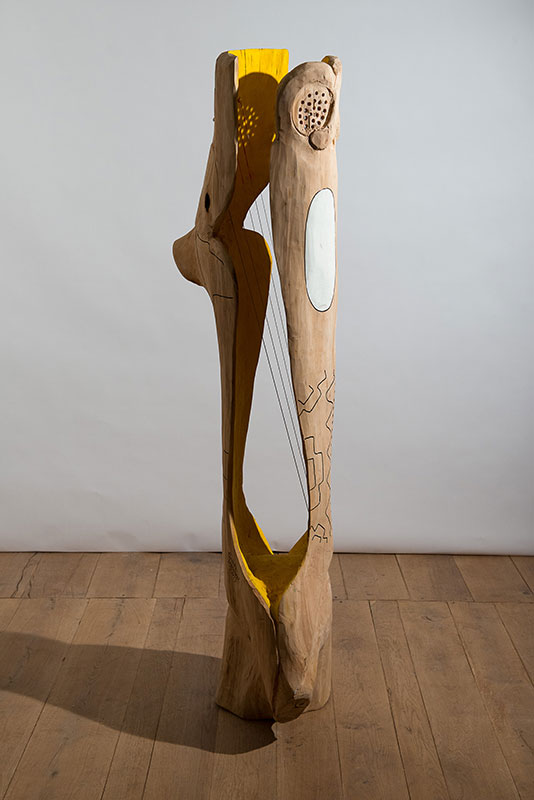 Elisabeth von Samsonow. COMING INTO THE WORLD (performance)
Opening hours of the gallery 16th of september until 31st of october, Tuesday-Friday 14-18,
Saturday 11-14

On the occasion of her 60th birthday Elisabeth von Samsonow presents new works under the titel „protuberance“ dealing with the origin of sculpture in camber. Furthermore, a group of large formate paper works are presented for the first time. These works express the fascination the artist had in her thirties for the painting of Frida Kahlo, Paula Modersohn, Lovis Corinth, Max Beckmann and Franz Marc. They explore being a young woman, as a Jeanne d’Arc who goes for fighting, for instance, as friend among friends, as a thinker and researcher of myths, as somebody who projects being female in all directions. The exhibition is dedicated to Hans Kreill, a bavarian farmer, who died in October 2015. He had kept well these works for the artist thirty years long. 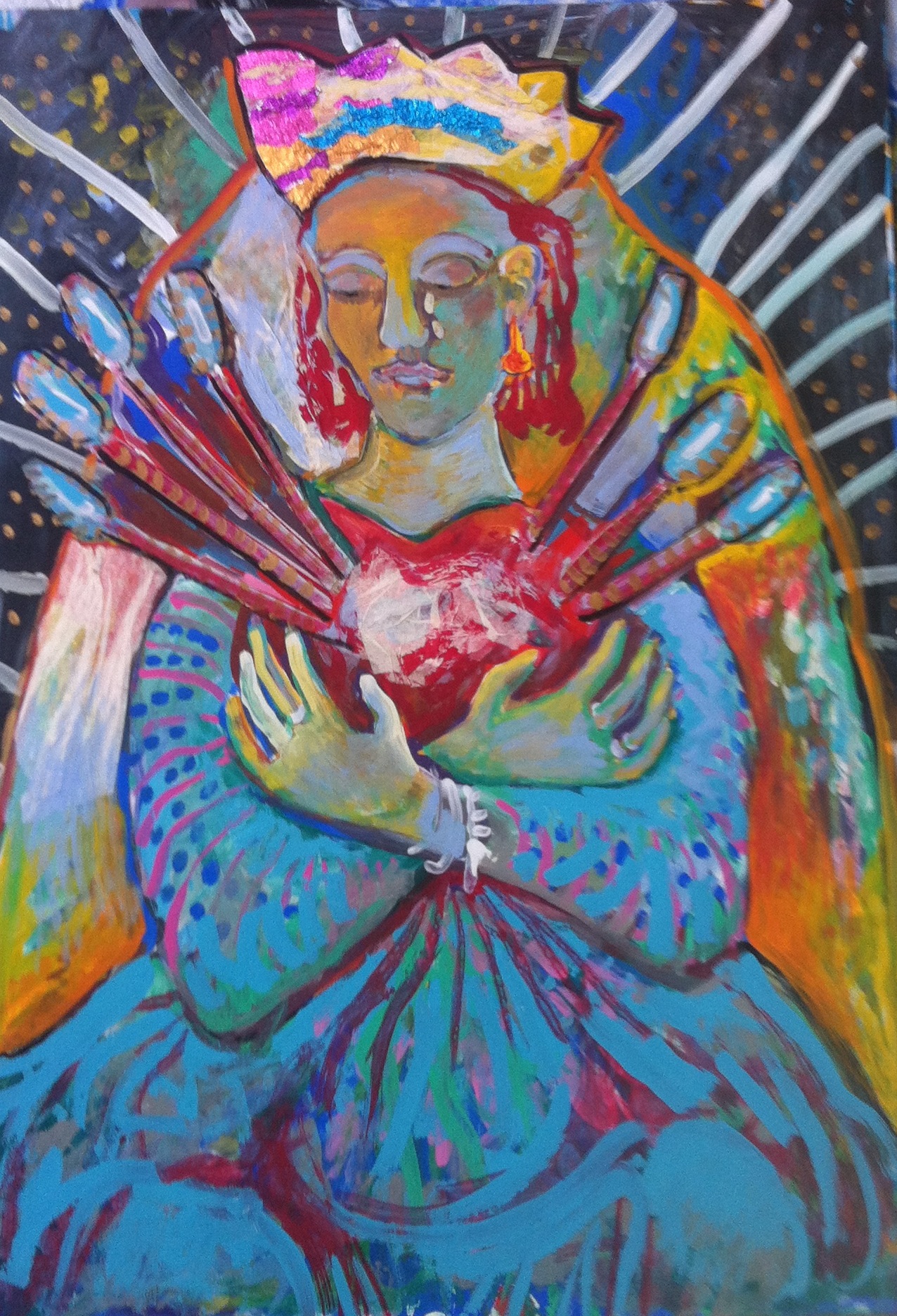 Madonna with the brushes, gouache, 1985

Elisabeth von Samsonow’s sculptures of linden wood radiate sound and perfume, speaking about the liquid of life, about the green blood chlorophyllum which is so intimately related to the red one. Human breathing is a gift of the plants, recalling that the children of gods are creatures born from one  matrixial body, different in kind, but made from the same wood. Out of encounters in harmony and disharmony, in play or violence, archetypical patterns of power and impotence emerge that draw the tragedy of the individual. (Margot Fassler) 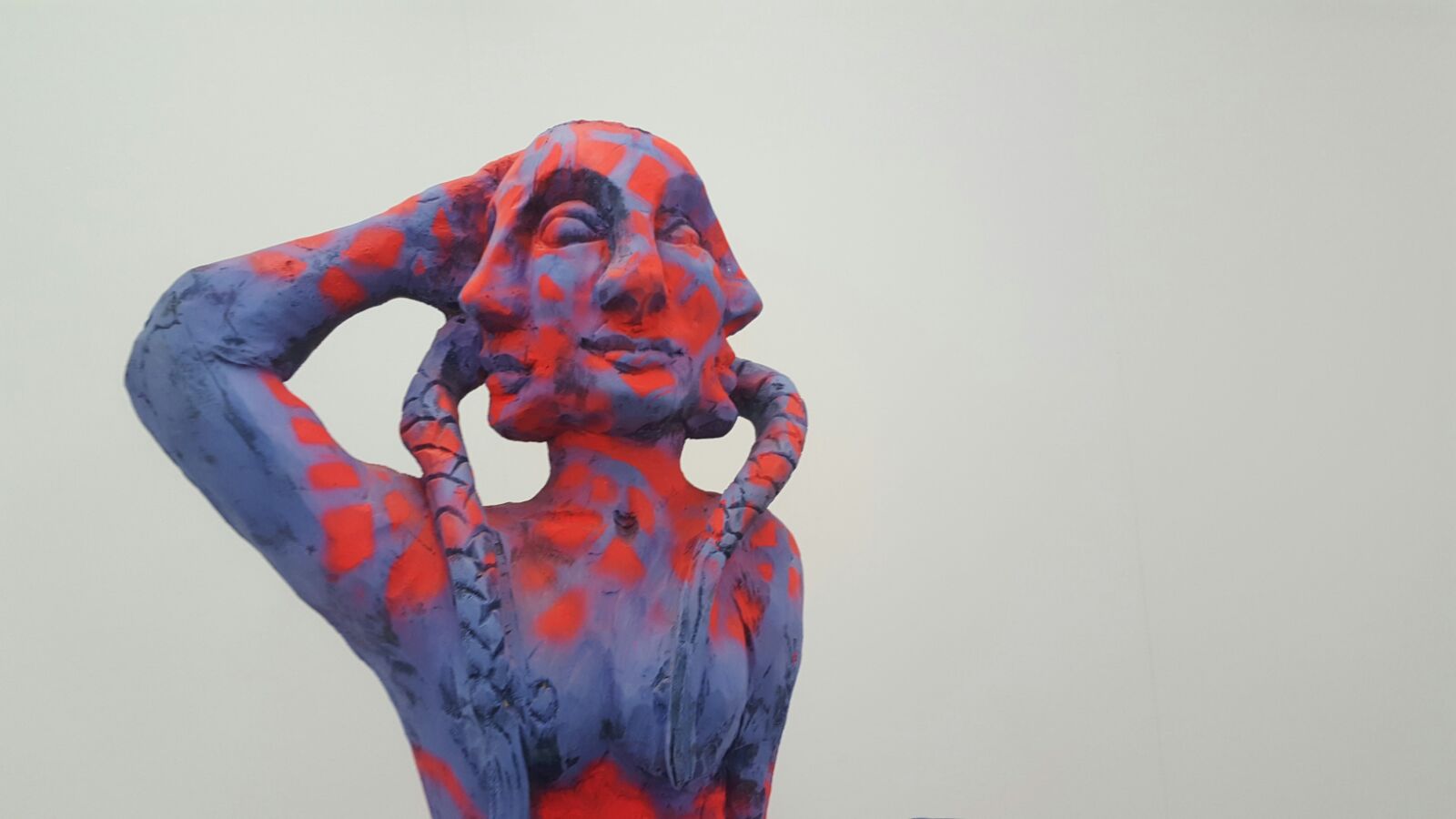 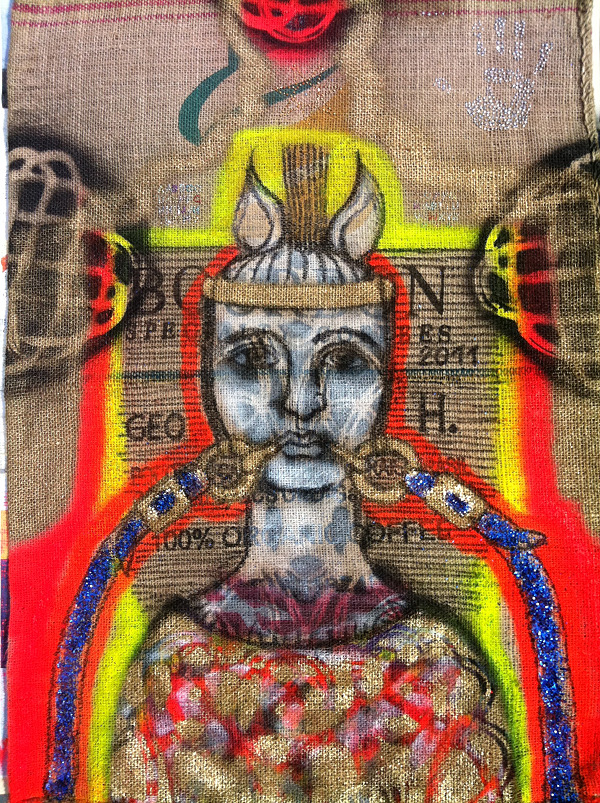 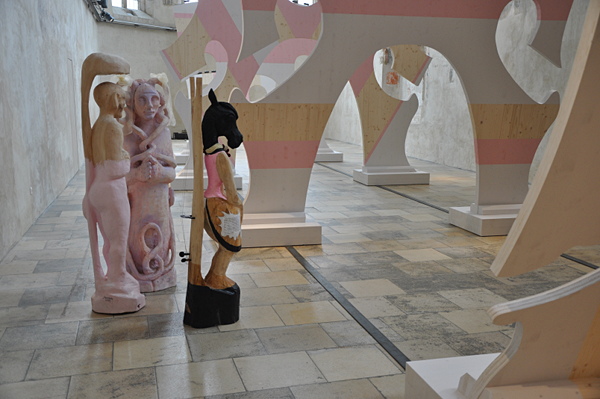 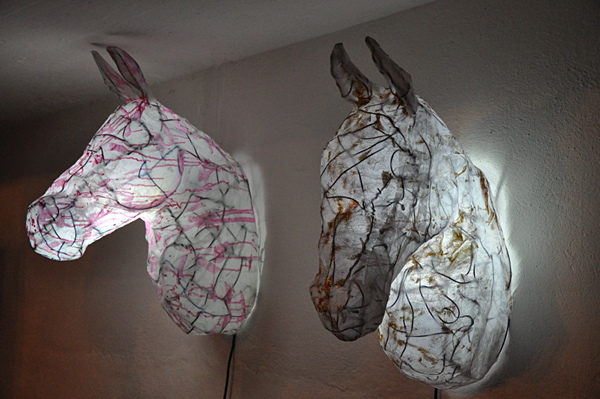 ELISABETH VON SAMSONOW THE SYMPTOM AND THE CURE 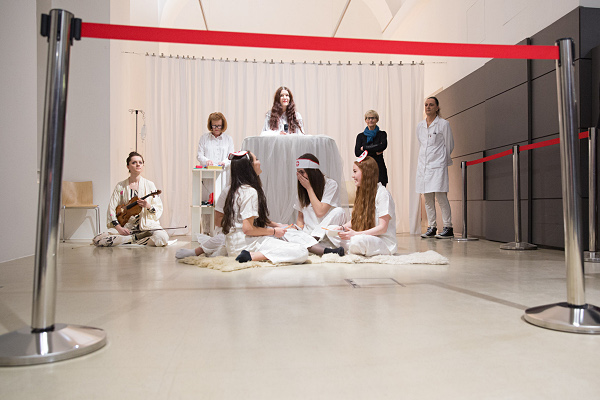 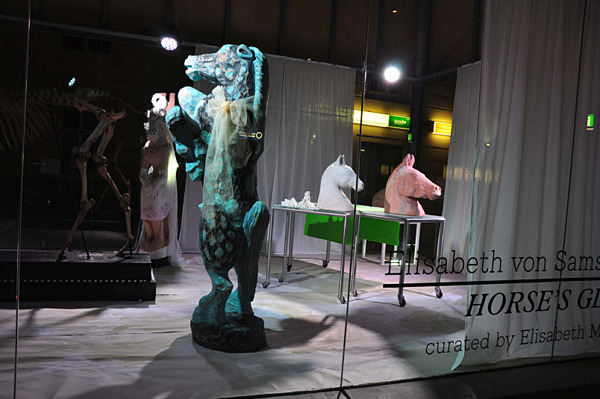